What are nightmares? Why do we have them? What are the causes of nightmares and other scary dreams?  What are the reasons for bad dreams? Do I have a nightmare disorder? Why do I only get bad dreams at night and not during the day?

These are some of the most common questions about scary dreams asked by people every single day. Nightmares are usually a disturbing combination of scary dreams  and negative thoughts that you may experience from time to time. Sometimes there are no reasons for these bad dreams, and sometimes you may know the causes of nightmares. They may be triggered due to anxiety, stress, subconscious thoughts or emotions or a personal traumatizing experience. But before you go down the spiral and assume you have a nightmare disorder, read further!

Did you know that nightmares are not something only kids have? Everyone has nightmares at least once during their lifetime. Disturbing dreams and nightmares are not only caused by horror movies, but experts say that there are quite a few reasons why you might wake up in a cold sweat in the middle of the night from a nightmare. Are your nightmares causing you a lot of distress? Are they keeping you from getting restful sleep on a regular basis? Knowing the reasons for bad dreams and the causes of nightmares may reduce their occurrence and probably in falling asleep peacefully.

What Is A Nightmare Disorder?

So, why do we have nightmares? Do you have bad dreams at night and wonder what is the reason for bad dreams? This might answer your questions. A Nightmare Disorder, also medically known as Parasomnia, is a kind of sleeping disorder that causes disturbing feelings while you are sleeping. Bad dreams or nightmares are realistic, vivid and disturbing dreams that disturb your deep sleep and wake you up in a scary way. These bad dreams or a nightmare occurs during REM sleep which is the deepest state of sleep. 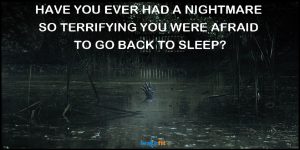 Reason for Bad Dreams and the Causes of Nightmares:

Before you know how to stop nightmares, here is a look at some of the reasons of nightmares:

1. Stress and Anxiety – The Primary Cause of Nightmares

Reasons for bad dreams to become scary nightmares often result from traumatic life experiences. Sometimes stress and anxiety are, in some cases, the reasons for dreams and nightmares. According to experts, grief over the loss of a loved one, a major illness or surgery, and witnessing or suffering a major accident or assault can trigger off and addressing this can be an answer to how to stop nightmares. Another common cause of recurrent nightmares can be Post-Traumatic Stress Disorder (PTSD). However, traumatic events are not the cause of all nightmares. Bad dreams reasons are similar to that of a nightmare. In many cases, daily stressors like major life transitions such as divorce or moving or work-related or financial problems can contribute to night terrors. So how to avoid bad dreams, focus on reducing your stress and anxiety!

One of the biggest bad dreams reason and leading cause of nightmares is Alcohol. A night out with friends for cocktails and other drinks can lead to nightmares. First off, it suppresses REM (Rapid Eye Movement), sleep – which is when you have dreams. As the alcohol in your system is metabolized, it results in dreams, sometimes in the form of intense nightmares. Additionally, the upper airway is relaxed by alcohol, so when you drink before sleeping, your airway collapses even more. This is why experts say that consuming alcohol is one of the major causes of nightmares.The combination of not being able to breathe properly and dreaming can create a situation where you have a bad dream or a nightmare which often involves being chased, drowning, or the feeling of being suffocated. If you are seriously searching for an answer on how to stop nightmares, then first, simply try to limit alcohol consumption.

Late-night snacks can also be a cause of nightmares. The snack can cause an increase in metabolism and signal more activity in the brain. Also, eating a big dinner, especially a spicy one, can also be reasons for bad dreams that are scary or nightmares later. Lying down when your stomach is full can trigger acid reflux and this may, in turn, disrupt sleep. When your body is trying to digest food, cool itself down, or filter out snoring by your sleeping partner, it can make your sleep go out of whack. This, in turn, can be reasons for dreams that are bad and increase the number of wake-ups you experience throughout the night. So do not let your temptations be the cause of nightmares and disturbed sleep. Avoid late-night snacks if you have frequent nightmares and want to know how to stop nightmares that ruin your night.

Medications can be reasons that impact your goodnight’s sleep. Going off your medications, especially antidepressants can cause nightmares. If you want to know how to avoid bad dreams, speak to your doctor and decide that it is a good time to lower your dose or stop taking them or switch to another medication, then it will have an impact on your sleep and become reasons for dreams that are nightmares. This is particularly true if you stop the medications abruptly instead of gradually tapering off the dosage. This often occurs because antidepressants alter the levels of neurotransmitters in your brain. Stopping medications can have an effect on the behaviour of your neurotransmitters, which in turn can be reasons for dreams that are scary. If you are having after stopping medications, speak to your doctor on how to stop nightmares.

How To Stop Nightmares?

Nightmares can have a significant effect on your health and well-being and hence you should learn how to avoid bad dreams. Sleep deprivation that results from can lead to a wide range of medical conditions, including obesity, heart disease, and depression. If you are a symptom of PTSD or untreated sleep apnea, the underlying disorders can also have very serious adverse effects on both your physical and mental health. If you have recurrent nightmares, you should consult your doctor to determine how to avoid bad dreams and take steps on how to stop nightmares by treating them and reducing the frequency of your nightmares.

Knowing the causes of nightmares and understanding how to avoid bad dreams at night is essential as it causes sleep deprivation, sleep deprivation, in turn, causes further nightmares. It is a vicious cycle. If your nightmare disorder is chronic, then it is best to stop wondering how to stop nightmares and seek professional help. For acute cases of nightmares, how to stop nightmares is by making some changes in sleep habits which are tried and tested. Some of these changes include avoiding alcohol and caffeine before bed, drinking a cup of relaxing chamomile tea, avoiding devices and their blue lights, and doing some light stretches before bedtime. Apart from this, the best answer for how to avoid bad dreams is to change the mattress you are currently sleeping on as that can be the reason for dreams. Instead, invest in the best mattress for sleep like a memory foam mattress that gives you the support your body deserves and the most luxurious sleeping experience.