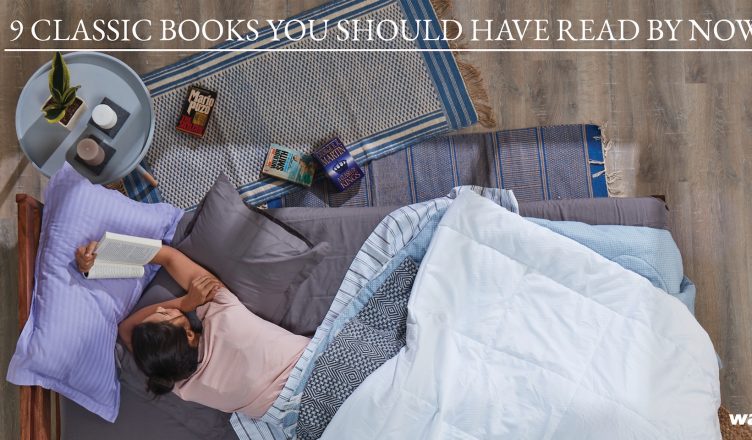 All the book lovers out there, today’s your day! And as a tribute, here’s a list of the best classic books to reread.

In case you are new to the club, worry not. It is never too late to start reading. In fact, this list could help you pick some of the best novels ever written, and you can finish them up by Book Lovers Day, next year! You can thank us later for the brilliant idea.

Earlier this week, Toni Morrison passed away. And we think, one of the best ways to remember this literary giant, is to read her classic book, Beloved.

This 1987 novel by the American writer is set after the American Civil War. It is inspired by the life story of Margaret Garner, an African American slave, who, by fleeing to Ohio (a free state) in January 1956, escaped slavery.

Emily Bronte wrote only one novel in her lifetime, and boy, what a phenomenal job she did with it!

Wuthering Heights was published by Bronte in 1847, under the pseudonym “Ellis Bell’. The novel covers the doomed love story of Catherine Earnshaw and Heathcliff. Their passionate but unfulfilled love eventually destroys them as well as the people close to them.

In Search of Lost Time, also known as Remembrance of Things Past, is a novel in seven volumes.

According to literature lovers, this is Proust’s most prominent work. The volumes deal with the theme of involuntary memory, with “episode of Madeleine” (First volume) as one of the most famous and often-cited examples.

A novel by one of the greatest Russian authors to have ever walked on the planet, War and Peace chronicles Russia’s invasion by France.

Through the stories of five Russian aristocratic families, the book looks at the influence of the Napoleonic era on Tsarist society. If the plot has already blown your mind, then why not get started immediately!

A 1925 novel by American author, F. Scott Fitzgerald, The Great Gatsby, is the story of a young millionaire Jay Gatsby and his love and obsession for beautiful Daisy Buchanan.

The book looks at themes of idealism, corruption, excesses of all kinds, and is often described as a cautionary tale of the American Dream.

Moby Dick, or The Whale, by Herman Melville, is an 1851 novel of an obsessive quest.

After having his leg bit off at the knee by a giant white sperm whale (Moby Dick), Ahab, captain of the whaling ship Pequod, seeks revenge on the former.

An 1813 romantic novel that people are still gushing about, Pride and Prejudice by Jane Austen is a story of Elizabeth Bennet, who, in the novel, learns about how hasty judgments can have repercussions, and by the end of it, comes to appreciate the actual goodness over superficial niceness. Also, Mr. Darcy!

To the Lighthouse by Virginia Woolf is a 1927 novel that centers on the Ramsay family’s visits to the Isle of Skye, Scotland, between 1910 and 1920.

The book’s themes include loss, subjectivity, the problem of perception, and the nature of art.

In this book, a bildungsroman, personal growth, and development of Pip (an orphan) is depicted. The imagery used in the book is extreme, from poetry and prison ships to fights to death, the book is a feast for the reader.

How many of these classics have you read so far?